It’s the second time we’re at Kidzania and the best time is in the first hour or so after it opens. Any time later and the queues get long. Entry is via what looks like the departure lounge of an airlines and upon entry the kids get 20 kidzos in cash and 30 kidzos in their bankcard to start. Kidzo is the currency in Kidzania and the kids can use it to buy stuff at the end of the day.

At each station there will be a sign telling you the type of activity, age limit, how many kidzos you will make etc.

Each activity takes about half an hour and the waiting time can be anything from 5 minutes if you come at the right time to more than an hour for the popular stations like fireman or police.

Sophia starts the day with being a baby doctor and thereafter paramedic (which she has tried before the last time we were here). Seems she really likes the medical stations.

Watching her feel for her pulse reminds me of my St. John days…

Unfortunately you do encounter your fair share of unpleasant events in Kidzania. Not making it into a group means losing half an hour or more of play time. As a result, there are people who try to game the system by splitting up and queuing at different stations, or attempting to queue for their kids. The last time we were here the staff would politely tell them not to do that. Unfortunately, this time round, at the dental clinic, there was only one staff running the show so when a lady tried to get her two nieces to join the queue in her son’s position, ahead of Sophia and another girl, nobody stopped them. I had to step in to say that is not fair to all the children behind and every child needs to queue for themselves. Actually because of the group count, it didn’t make a difference to Sophia. She was in the next group anyway. The only person who benefitted was the girl in front. But it’s more the principles of it and teaching Sophia that she needs to stand up for herself when she is in the right. The whole matter did leave a bitter taste to the day though.

After completing the dental clinic session Sophia’s friend arrived and they started doing a series of girly things like fashion boutique, getting their makeup done, getting a temporary tattoo etc, mostly kidzo spending things that Sophia wouldn’t otherwise have done.

Then they did courier, which was cute but they would never have found the places if we didn’t eventually step in. Not only did they go round and round aimlessly, they would pass the location they were supposed to go to and not even realise it.

After that were a few sciency stations like water quality assurance which we were too tired to take photos of, and baby doctor station again, and Sophia’s Friend went home.

Sophia continued to do a window cleaning station and after that claimed she pulled a leg muscle and we headed home. 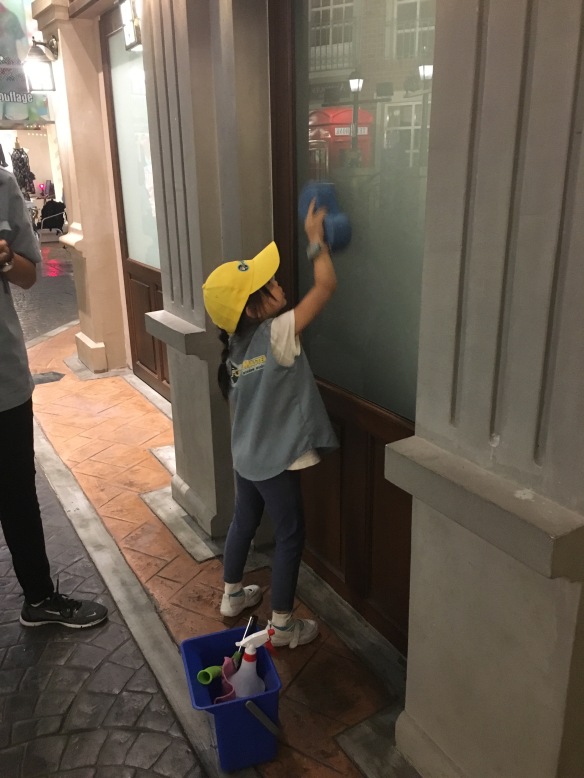 I think they can have a few more cleaning type stations 🙂 would be handy to train the kids to do cleaning!