In a bid to get the sick girl to eat more, I put fish floss on a slice of buttered wholemeal toast. She just licked off the floss. 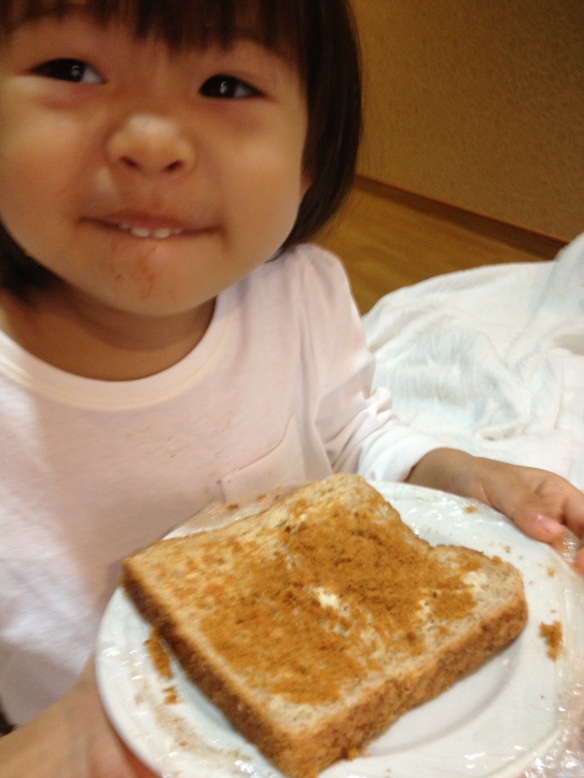 I bought a cuisinart ice cream maker from the US along with a voltage transformer. Guess what, the first time I used it I broke the paddle and cover, and the second time I blew the fuse. Yep, its gone, the internal bits are all melted. The good thing is that the first time I made delicious strawberry ice cream that was a little too watery for the daddy’s taste but nevertheless delicious. The second time I made divine chocolate gelato. Both times churning by hand so it was a tremendous effort and it felt like great recipes should be shared. The best thing is that the ingredients are things we almost always have in our fridge.

Gelato’s ready and the best thing is its ready to eat immediately unlike homemade ice cream which needs to be frozen for another couple of hours. 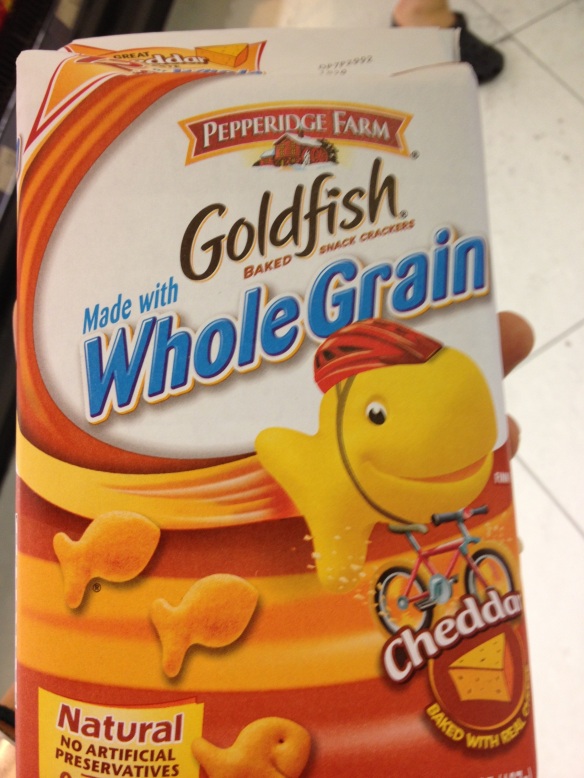 In this little store in Tanjong Pagar is the best ramen I have tasted so far. The broth is extremely thick and flavourful and the ramen is springy to the bite.  They are also generous with the ingredients, with 2 substantial slices of cha siu and loads of beansprout, bamboo shoots and seaweed plus half a stewed egg. Definitely more ingredients than noodles. Yum.

And then we have the legendary hole in the wall that was awarded a michelin star – Tim Ho Wan from Hong Kong opening an outlet in Singapore. It remains to be seen whether the standards will be maintained.

I’m glad to see (relatively) affordable food choices coming to Singapore on top of those ridiculously priced celebrity chef places that I may think of going to when I’m celebrating my golden anniversary or something.

While we’re on topics about health (given the last smoking ban post), I thought we’ll move on to the World Salt Awareness Week which is taking place 11 – 17 March this year.

Growing up in Asia, particularly in a Chinese family, its taken for granted that salt is a daily essential. There’s this Chinese saying about the 7 things that basically are the most important necessities in a Chinese family and they are: firewood, rice, oil, salt, soy sauce, vinegar and tea. Can’t live without them. Of course, some are now irrelevant like firewood but you still need a stove, electric, gas or whatever else there is. I grew up reading and watching stories about wars won by depriving the other side of salt but on less dramatic front, salt has definitely played other important roles in Chinese history. Its an important source of tax, its used to preserve food for the winter, its even somehow linked to the discovery of gunpowder! Not sure that’s actually a good thing.

These days, of course, salt has been given a bad name for its association with various health hazards like high blood pressure, obesity, certain cancers and more. Its still ok to use salt as a flavour enhancer but moderation is key, and many foods naturally are salty so you can go easy on the salt when cooking with those foods.

Sophia naturally seem to like savoury rather than sweet foods, so I should be worried about her salt intake but the good thing is, her diet still consists mainly of a porridge without added salt (or soy sauce, which is the cheat way of adding salt). Thought I’ll share the “recipe” here with anyone who cares to try it. May be too bland for children who are already used to having salt in their porridge though.

Ideally how I would like to cook this would be to boil the grain and carrot together until they are soft the turn off the flame and add in the fish and green vegetables. Then come lunch time the whole pot can be brought to a boil again, allowing grandpa to easily prepare lunch that is cooked but not cooked to death.

Hope you liked the recipe! I would be grateful for any other salt-saving tips or recipes!

Last Saturday we decided to bribe the kids playing by the pool with ice cream. It all started with one evening when daddy went downstairs for our nightly walk as a family holding a popsicle-type ice cream. One of the older girls stared hungrily at it and kept hinting that she loves ice-cream. Well, we are not about to give her half eaten food, so we promised to bring her ice cream “tomorrow”. Of course, like normal kids, she forgot about it tomorrow and didn’t come down to play because it was raining. But the daddy figured we’ve got to keep our promise. So everyone got ice cream. Not sure the maids were too happy about it as they had to go around wiping mouths and shirts, but the kids sure were! 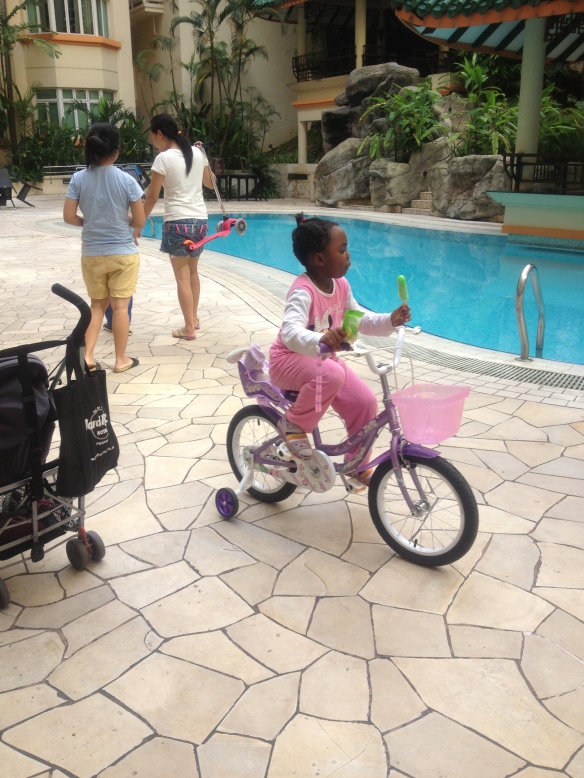 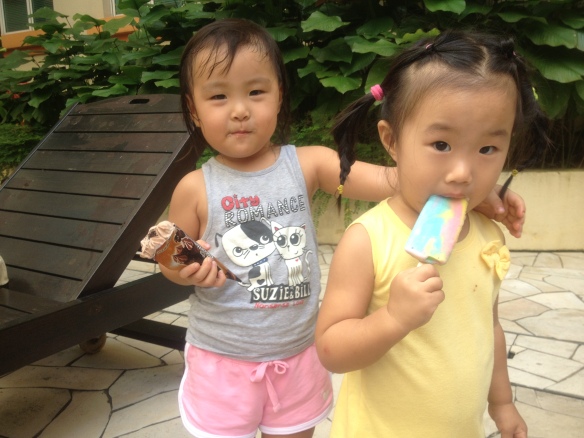 We finally went to Food For Thought at 8 Queens and I’m glad to report that I like the place! No wonder its still so popular after opening for so long when many other cafes fizzle out after the initial novelty factor. The portion of the food is substantial and very nicely cooked. Sophia loves the scrambled eggs, of course.

A while back Kenny and I went to Chengdu and had some food adventures of sorts. By my standards, at least. Among the food that we tried was braised rabbit. At that time Sophia’s favourite toys were her two soft toy rabbits which she hugs to sleep every night, so when we were eating, we kept poking fun at each other, going “Oh, I’m going to tell Sophia that you ate bit bit meat”, “bit bit” being her name for rabbits at that point in time.

Sampling of Chengdu street food, no rabbits here though.

Fast forward a year or so, Sophia’s cooking up her toy dog, cow and rabbit and bringing her culinary experiments to us saying “eat!” with an evil grin.

I’ve got a morbid little girl at home, that’s all I can say!

I don’t know why teachers at Sophia’s school says the kids reject fruits. Sophia adores fruits and her favourite of them all is BA-NA-NA. If she sees a bunch at home, she will keep asking for one. Once we gave her one not knowing it is still quite raw and she devoured it till daddy took a bite and went “yuck”. Give the girl a banana and you’ll get 5 minutes of peace in return. Ahh… 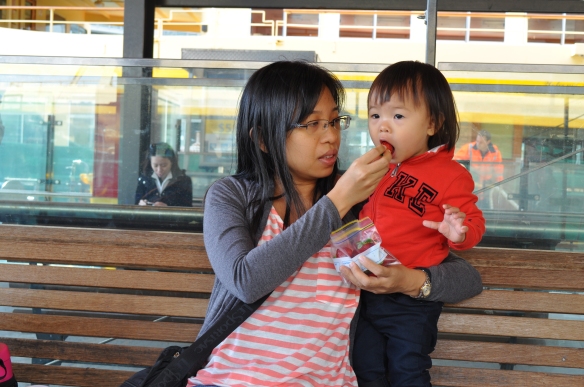 I am down with flu and too dazed to write. Enjoy the photos!