What a pleasant surprise to find that one of the little pigs in the last musical Sophia watched was the husband of my friend from law school.

An entertaining musical too! Not sure how much Sophia understood given its in mandarin.

Over the hills and far away 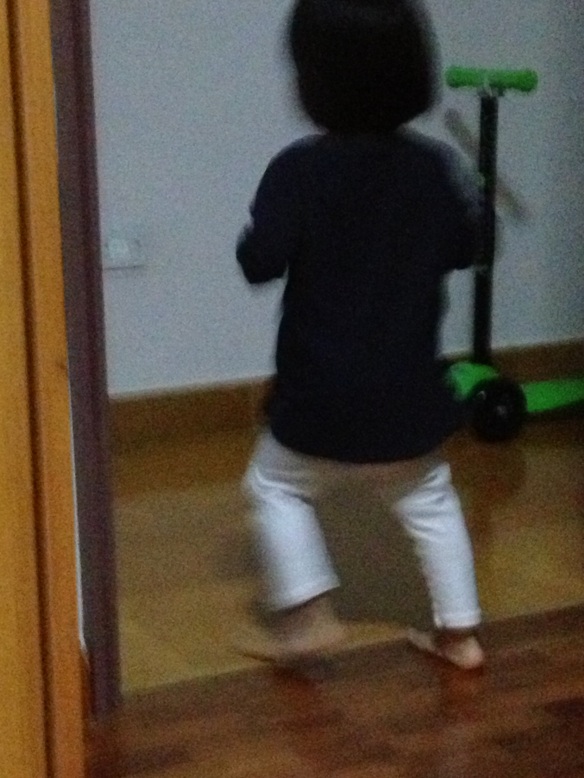 Here is Sophia with her mic. I know that looks like a drumstick to you but trust me, it is a fully functioning, voice magnifying microphone perfect for singing into, at least in Sophia’s mind.

To the adults, though, it is a stick for playing the glockenspiel. But why should that matter. Next step: to work on actually singing to tune instead of chanting the individual words.

Yesterday I brought Sophia to a trial at Staccato!.

Sophia on the piano

What do I like about it? It seems rather serious about classical music. Teacher Chin Yee plays the piano and her profile is available on the school website so I shall not repeat it here. The founder is Dr Lee Pei Ming, assistant professor at the Yong Siew Toh Conservatory of Music. Which really is as good as music schools get in Singapore. I like that the school focuses on classical pieces but tries to make it fun for the children. For example, this term’s theme is The Carnival of the Animals, based on the musical suite of the same title by Saint-Saens. The teacher played (I think) the third movement and told the children that’s a horse, showed a flashcard of a horse and got everyone to gallop around to the tune. She then played a contrasting slow piece, the fourth movement, and showed a flashcard of a tortoise. Everyone was supposed to crawl around. There were also attempts to get the children to play twinkle twinkle little star on the keyboard and a toy piano. They all loved the little red toy piano though I thought the pitching was clearly off. Not that children cared, they just want to bang on the keys. The teacher was very patient and gentle with the children. Sophia was clinging on to a Dora doll that she found in the waiting area (which, by the way, was nicely filled with toys and books for the children) and she allowed Sophia to bring in the doll. The other girl at the trial brought her own blanket pal and the teacher included “Medan” in many of her activities too.

Moreover, if you arrive a bit earlier you can get more bang for your buck by hanging out at the waiting area which is filled with as much toys and books as some commercial play gyms (minus the slides and stairs of course). Sophia enjoyed the toys, especially the Dora doll at the background of the photo below.

Having fun with toys at the waiting area

What I didn’t like. The only real gripe was the use of star stamps and stickers to reward the babies. I think its good for slightly older kids but for the below 18 months olds they are really not old enough to like these things all that much and more importantly, they don’t know these are not meant to be eaten or rubbed into their eyes. A star was stamped onto each of Sophia’s hands which she of course proceeded to lick at some point in time I’m sure. And the star sticker that was on her shirt ended up in her mouth while she was on the car. I guess the teacher could potentially be more cheery but still she’s the most qualified music teacher (both in terms of paper qualification and her performance at the trial) I’ve seen so far when all factors are taken into account so one really shouldn’t be under the illusion that there is such a thing as a perfect teacher.

Will I be back? Maybe when Sophia is older but for now I don’t really think she is gaining much from the sessions and I’ll be better off playing classical music to her more often at home.